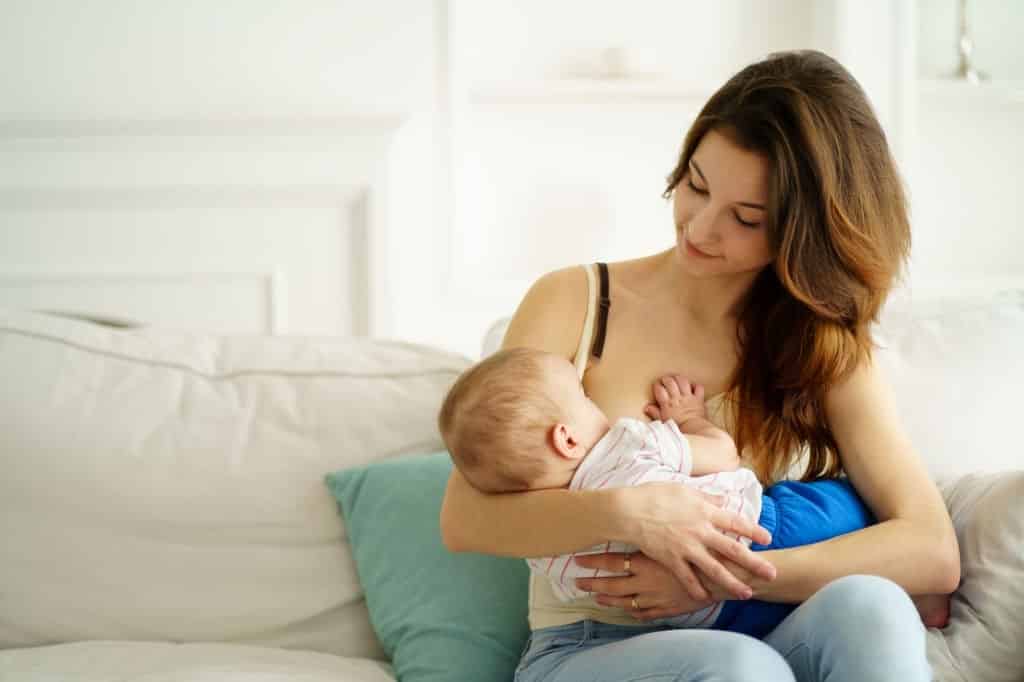 Nipple confusion can sometimes be the cause of a whole range of breastfeeding problems, and in this case, prevention is definitely the cure.

Giving your baby a dummy or bottle in the first few weeks can lead to nipple confusion. This is because the way your baby sucks on your breast is very different from the way he or she would suck on a bottle or dummy.

To get milk from your breast your baby will hold your nipple very far back in his mouth while the gums compress the milk ducts under the areola, with the tongue moving rhythmically from front to back milking the areola and the nipple.

To milk a bottle, your baby doesn’t need to move his tongue. Simply moving their gums up and down is enough to allow gravity to do the rest and make the milk flow from the bottle. The milk doesn’t need to be drawn out of a bottle, as it does from your breast.

Babies who have been given a bottle soon after birth will appear to be pushing the nipple out of their mouths and will only suck the tip of the nipple. The same type of “tongue in front” sucking is used when sucking on a dummy.

Babies also become used to the fast and immediate flow of the bottle and can become frustrated if they have to wait for a let-down. This can lead to nursing strikes (breast refusal )and milk supply problems.

Nipple confusion can also lead to very painful breastfeeding as your baby may chomp down on the tip of your nipple, as they would do when bottle feeding.

The pain you feel will make having a let-down more difficult, making it tempting -and understandably so- to give your frustrated, crying baby a bottle instead.

The difficulty your baby may have in latching more deeply can lead to cracked nipples, engorgement, and possibly mastitis, depending on how much milk your body is making.

Over a short time, these breastfeeding problems are more likely to cause you to give your baby yet another bottle…which will lead to a drop in your milk supply, and in many cases permanent bottle feeding.

Other signs and consequences of nipples confusion in newborn babies

The cause of this nipple confusion syndrome is found when the baby shows resistance to being fed from the mother’s breast. Indeed, he tends to prefer the bottle nipple because the effort to obtain the milk is less.

This problem usually occurs when babies are fed both bottle and breast at the same time. This sends the wrong message to the child who finds himself confused when it comes to breastfeeding.

Although many mothers use the bottle during breastfeeding because they have no other choice, it can cause confusion for the baby when to suck the bottle and the nipple.

These cases usually occur in newborns who are separated from their mothers at a crucial time.

It can also occur in babies who are artificially fed when their mother is not at home. This syndrome can lead to what is known as a “breastfeeding strike”.

This “strike” affects the mother’s milk production and can cause mastitis. And, in cases where it is not treated in time, this implies the end of breastfeeding.

How to reverse nipple confusion in newborns?

One of the ways to prevent the onset of nipple confusion is to avoid giving the baby pacifiers and bottles. At least for the first six weeks of life, try, if possible, not to use them.

For the first few times, it is best to feed the baby before giving him the breast. If the baby is too hungry, he will undoubtedly risk refusing the feed and he will remain in front of the breast crying. Which will be quite frustrating for the mother.

Now you have to encourage your baby to latch on. For this, the mother can place a few drops of breast milk on the baby’s lips or use a breast pump which will be used to avoid the milk ejection reflex so that the milk arrives effortlessly in the child’s mouth.

Offer your child the breast as soon as possible in a calm environment. After each feeding, use a breast pump to stimulate your lactation.
Don’t be afraid to carry your child in a sling, to skin to skin with him, in short, to create a real closeness with your newborn, because all this can only promote breastfeeding.

If you are having problems with your baby’s attachment and feel that there may be some nipple confusion, lots of skin-to-skin contacts can help.

You can try breastfeeding your baby before they are overly hungry and offer the breast frequently.
Make sure that you are expressing for your own comfort and to keep your milk supply up.

You can also try hand expressing just before offering your breast to your baby as this can help bring on a let-down.
Seek help from a family health nurse or lactation consultant that can support you through this.

Breastfeeding is a learned skill, it takes time and patience. Go easy on yourself and focus on the wonderful bond you have with your baby, this will help the both of you.

Nipple confusion in newborns tends to occur when a baby is bottle-fed during the first few weeks of life. Indeed, the suction exerted by the baby on the breast and on the bottle is totally different and this is where the problem appears.

When the baby takes the breast, he works his tongue and his jaws requiring a real effort to get the milk out; unlike the bottle simply placed in his mouth, the milk flows without any effort on his part. It is his different modes of sucking that disturb the child.

This problem is not encountered only in the case of bottle feeding, but also when the mother gives a pacifier to the baby during his first weeks of life and when using nipple shields. Here too, the baby may develop nipple confusion.