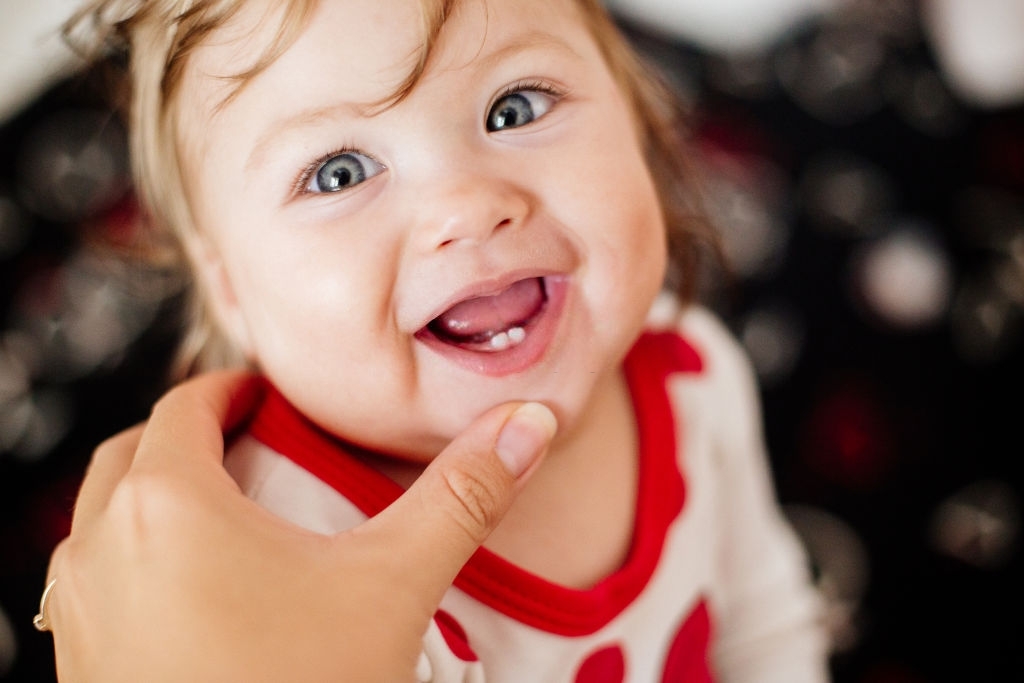 Can babies start teething at 4 months? the answer to the question is yes. In fact, it’s very common for 4 months old infants to get their first couple of teeth since teething usually occurs as early as three months of age and continues until the third birthday.

Between the 4th and 7th months, you will probably notice the first tooth coming out of the gum line. The first set of teeth is usually the two front teeth at the bottom, also called the central incisors.

These are usually followed by the four front upper sets of upper teeth which are called the lateral and central incisors that usually appear 4 to 8 weeks after the first set of teeth appeared.

Baby teething or the emergence of the first set of teeth through the baby’s gums can be a painful time not only for the little ones but also for their parents.

It can be a great help to know what you should expect when your baby is going through the baby teething stage as well as how you can make the process less painful for your baby.

In some cases, children are born with 1 or 2 teeth or have 1 or 2 teeth that have emerged in the first few weeks of life. However, this is not a cause of problem or concern except when the tooth interferes with feeding or is loose enough to cause choking.

As babies go through the baby teething stage, they might want to put many things in their mouth, chew things, and might drool more.

This stage can be very painful although some babies may go through the process without experiencing any pain. Others may show noticeable irritability and crankiness for weeks, with disrupted eating and sleeping patterns and crying jags.

Teething can really be uncomfortable; however, if your baby becomes very irritable, consult your doctor.

Signs of teething at 4 months old

The very first sign that indicates your baby is going through the teething episode is the seeming loss of appetite, especially if your baby has always had a good appetite.

During the teething process, the gums of your baby will ache. If you are breastfeeding, he might seem unwilling to feed and may show fussiness. This is due to the discomfort caused by sucking with swollen gums.

If he is already eating solid foods, he might entirely refuse to eat his meal because of the sore mouth. Technically, these conditions have very little to do with his appetite but more on dental sensitivity.

The second sign to be aware of is a slight fever. When you are breastfeeding, your baby gains immunity to some infections through antibodies ingested in breast milk.

The immunity he develops begins to wane around the first stage of baby teething. Because of this, there is an increase in his vulnerability to infections.

As his first tooth comes out of the gum line, there will be inflammation in the affected area and this can lead to a slight fever. You definitely have nothing to worry about; however, if the fever lasts for over 3 days, you should consult your pediatrician.

The third sign includes tugging, rubbing, and pulling. When the baby’s gums become painful, he will surely rub his cheeks and mouth and you will see your baby tugging on his ears more often.

This is because of the nerves. His ears and cheeks share the same path as the gums; thus, when the teeth are coming out, he feels pain and discomfort.

When he pulls on his ears and rubs his cheeks, it is because your baby would like to relieve or lessen the soreness. While this is generally normal behavior, it is still a good idea to consult a pediatrician to check if it is because of something else.

Finally, teething can cause sleeplessness because the baby also has to endure teething pain and discomfort during the nighttime. When their first sets of teeth are struggling to come out, they don’t stop working. For parents, this often means sleepless nights because their babies have to cope with aching gums.

Related: How to Get a Newborn to Sleep at Night

If your baby is showing some irritability and fussiness, there is actually very little you can do except soothe him. Do not ever try to breastfeed your baby just to provide comfort because once this stage is through, it may be hard for you and your baby to break his late-night eating and feeding habit.

Other symptoms of baby teething at 4 months

A 4-month-old baby can show additional teething symptoms like irritability.

As the first sharp little tooth slowly comes out, your baby’s gums will increasingly become more painful and sore, causing your baby to become very fussy.

The discomfort and pain are at their worst when the first tooth is coming out and later on when the molars rise due to their larger size.

This is usually the case because babies start to get used to the sensation of baby teething and learn to deal with them.

However, you may also find your baby acting fussy during the entire teething stage because, remember, the reaction may differ from one child to another.

Another common symptom of teething for babies around 4 months old is drooling. Drooling is stimulated by teething and maybe worse in some babies.

Coughing is also a symptom that the baby is at the teething stage. The extra saliva can cause occasional coughing or gagging. When the cough is caused by teething and your baby does not have a cold, fever, or flu, there isn’t anything to worry about.

Chin rash also occurs during the teething stage. If the baby drools a lot, constant contact with saliva can irritate the mouth and chin. To prevent this, just wipe your baby’s chin and mouth periodically.

Teething babies gum and gnaw down on anything they can get their mouth around. This is because the counter pressure caused by biting helps relieve the pressure felt by the baby under their gums.

A hug to make your baby forget the toothache. Simply being there with your child and keeping him in your arms releases oxytocin, which is a hormone that creates a feeling of well-being.

A teething ring can be offered to the child. It should be refrigerated but not put in the freezer. Indeed, the cold has an anti-pain action. Preferably choose a ring without liquid so that the part that contains the liquid does not break when the baby chews. If you have an aversion to plastic, there are also wooden teethers.

Gingival massage to relieve pain. The gums can be gently rubbed with a perfectly washed finger or a clean, damp cloth as the massage will immediately relieve your child.

Osteopathy for baby. During the period of teething, the baby may experience certain maxillary pathologies, such as deformities of the jaws which will appear later. By intervening at this stage, the baby osteopath can prevent many children from wearing braces later on.

Indeed, an osteopath can help a baby prepare his gums by acting on the bones of the skull and in particular the maxillary bones and the mandible, but also on certain cranial membranes.

This intervention will have an immediate beneficial effect by calming the pain, soothing and thus helping the baby to regain sleep and appetite.

The action of the osteopath will allow the tissues to regain good mobility between them, the blood to circulate better, and the reduction of tensions.

Baby teething at 4 months old is a normal phase in the development of a child. To get through the teething period, you have to be prepared for the symptoms that a baby may experience.

It is very important to know when your baby is teething. It is best to take care of your baby during the teething phase because it will help her get better.

Some babies may have a bad time during the teething process, but rest assured that it will all be fine as soon as your baby has finished his teeth.